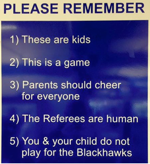 No matter if you are a new or returning hockey parent, I encourage you to read this, tuck it away, and then reread it throughout your child’s hockey career and hopefully it will bring you a smile and help you realize we are all in this nonsense together.

As a hockey mom of 3 and a Lizard Head Hockey Club board member for nearly 10 years now, I thought I would share with you some of my mistakes, triumphs, and wisdom I have picked up along the way to help you all embrace the joy of being a hockey parent.

The very first thing our mini mite coach told us was that none of our kids will be going to the NHL. Here are a few things they forgot to mention that first mini mite year but I have learned along the way: